I used to work for other people. I worked for other people for over 40 years. I showed up on time and did what was expected, with the exception of one job I had in the early nineties that expected WAY too much from everyone. I took vacations and holidays, had an office mug and some knick-knacks that either inspired me or reminded me of why I needed to work, had office buddies, some of whom are still great friends, and had great health insurance. I commuted in various little cars through rain, sleet, or snow, biked, or walked to work. I did my job, and I got paid, commensurate with experience.

These days, I work for myself. I get up at six a.m., make coffee for my honey, kiss my honey goodbye, take the dog out, eat breakfast, walk the dog, make tea, put the dog outside, check the computer three times in a row - Gmail, Yahoo mail, Facebook, go to the bathroom, switch on the television, switch it off, check on the dog, check on the computer again, because it's been ten minutes and something important may have come in, adjust the temperature, freshen up the tea, and walk into the office, about a half hour late. I bite my nails, then look at them. Good thing I have an emery board at the ready. Oh, wait, it's kind of worn. Time to get up and get a fresh one. I know it's somewhere, and when I find it, I'll sit back down, file my raggedy nails, and get to it.

I'm my own worst nightmare. I should document my truancy, verbally at first. Bad Morgan, bad, bad. You've been warned. You are now on a program. Then written - but of course, that would require writing, which is my job that I'm not doing because of DISTRACTIONS. It's not my fault. DISTRACTIONS. Yeah. Right. Consider this a written warning. If you're late, one more time - here's your hat, what's your hurry?


Writers are notorious procrastinators. It's been documented by so many writers. Writing about why we don't write is another form of procrastination. We all know why we don't write. It's due to - drum roll - procrastination. My favorite piece on creative procrastination was written by Carolyn Chute for the New York Times. How Can You Create Fiction When Reality Comes to Call? Great title. Wish I'd thought of that. Wish I'd written the piece. Wish I'd written the piece and had it published in The New York Times. Wish I'd gotten paid for that. But that would require discipline, and well, I've found the emery boards. Time to check on the dog. She used to have a yard where she roamed free, but now I have to tie her because we don't have a fence, so.  The dog is fine. She's sleeping in the yard. She's doing her job. I should get to mine.

Should I turn up the heat? Should I go to the bathroom now so I won't have to stop what I'm doing, later? Should I make sure the dog is still happy? Should I call my honey before he calls me to ask if he's interrupting me? 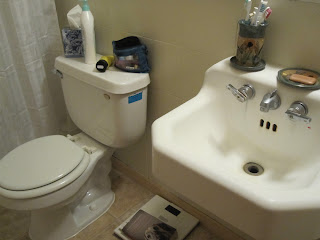 Why is it that we put off doing the very thing that we love the most? I do the same thing when I'm writing, actually. I call it scene avoidance. When I most want to delve into THE BIG MOMENT, I write around it. What I have discovered is that everything leading up to THE BIG MOMENT, everything surrounding THE BIG MOMENT, is what's important. It's called setting the scene. THE BIG MOMENT is the climax, and then, well, on to the next BIG MOMENT.  So, maybe, I am establishing the groundwork for the psychic BIG MOMENT - the use of my imagination, which is the best part of me. It's so good I can't take it, I guess. I should get to it.

I'm cold. I'm going to turn up the heat. Then, I'll start the day.
Posted by Morgan Callan Rogers at 9:25 AM 2 comments: